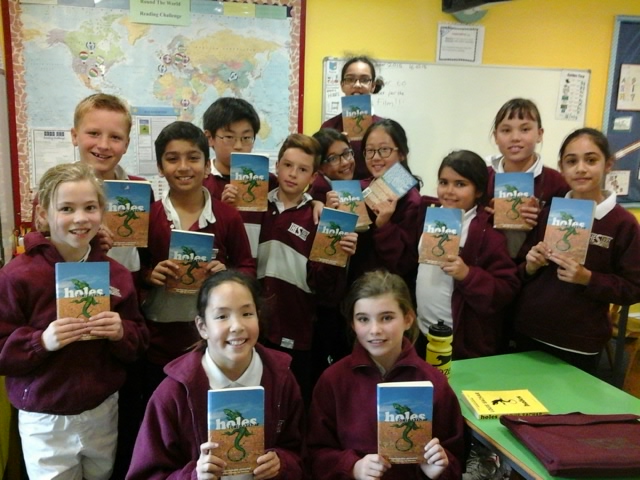 Stanley Yelnats, a boy who has bad luck due to a curse placed on his great- great-grandfather, is sent to Camp Green Lake, a juvenile detention camp, for a crime he did not commit. Stanley and the other boys at the camp are forced to dig large holes in the dirt every day. Stanley eventually realizes that they are digging these holes because the Warden is searching for something. As Stanley continues to dig holes and meet the other boys at the camp, the narrator intertwines three separate stories to reveal why Stanley’s family has a curse and what the Warden is looking for.

Holes, by Louis Sachar, was a real hit with Year Six this past term. This was our Autumn Term class novel. It was a fantastic way to start off the year as the book is absolutely riveting from cover to cover. The only problem was that the students did not want to stop reading (which makes an English teacher happy). Year Six had many Big Writing activities linked to the novel including a warning letter about a mysterious creature, a survival guide for Camp Green Lake, an exaggerated letter home from Stanley and a thorough book review discussing themes to round off the marvellous unit. We would recommend Holes to anyone in Year Six or Year Seven (so not yet Year Five-you must wait until September).

home / News / Year 6 / Year Six Study Holes by Louis Sachar
Inspiring Children
To Achieve Their
Personal Best
We use cookies on our website to give you the most relevant experience by remembering your preferences and repeat visits. By clicking “ACCEPT ALL”, you consent to the use of ALL the cookies. However, you may visit "Cookie Settings" to provide a controlled consent.
Cookie SettingsREJECT ALLACCEPT ALL
Manage consent