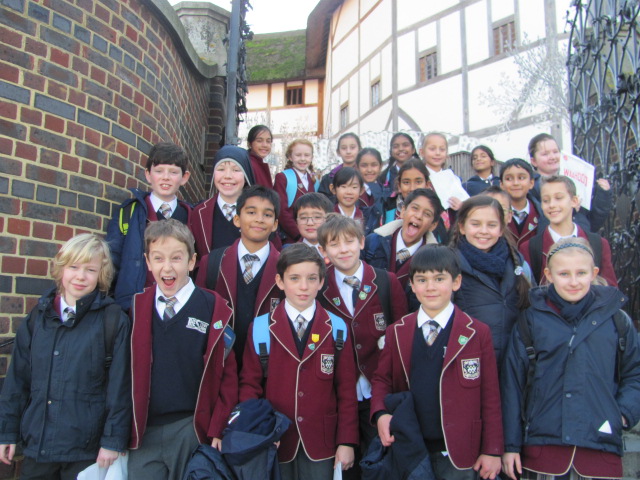 Year 5 and 6 trip to the Globe Theatre

On Wednesday the 18th of January, years five and six went to the Shakespeare Globe Theatre. It was very exciting to go to the theatre as it is very special. We went on the train to Waterloo then took the tube to the theatre. We had a short walk from there and we arrived, after passing the old theatre. We met our tour guide, Fay and she told us a bit about the theatre. She said the one we passed had been the second theatre and this is the third. The first theatre was burned down when a special effects cannon was fired. It was meant to go up in the sky through the hole in the roof like a firework but instead it caught on edge of the theatre and burned it completely. It isn’t a hole in the roof it doesn’t actually have a roof! This is because they had to perform plays in the day for the sunlight! The second also caught fire and now there is a third (which, thankfully, hasn’t actually caught fire). She took us through in the theatre and we sat down. First, she told us about the seating and where different people would have sat. In the yard, where you stand up in front of the stage is where poor people would go to watch the theatre. The others often called them the penny stinkards because they could only afford to pay one penny and they probably didn’t smell very nice. Behind them is the place where normal people in those days would sit. They weren’t rich, but they weren’t poor. Next to Juliet’s balcony (on the stage) are the lord’s rooms. These were the most expensive places to sit yet you were behind the stage. This is because people will admire that they are the really rich people because they are sitting on the stage. Next to them are the men’s rooms which were the same but not on the stage. To sit there would cost a penny less than the lord’s rooms because they were not on the stage. Those two rooms had chairs not benches and cushions! Also we got to go on the stage and say a few Shakespeare words.

Then, Fay took us to the Globe workshop. It was really fun! We did an activity where you picked someone you loved and someone you hated (not in real life, just for the acting) and follow the person you loved and get away from then person you hated. It turned out like A Midsummer Night’s Dream. Helena loves Demetrius who loves Hermia who loves Lysander and Demetrius hates Helena. So it all got a bit confusing. Then we had our yummy packed lunches! After that, we went on an expedition with audio guides. There were some models of old villages and people building the Globe. ( For some reason the audio guides were talking quite a lot about the Rose theatre.) Finally, we finished the trip with the gift shop and a pleasant walk down the south bank. It was such an exciting and interesting trip to go to but I was exhausted at the end. We got back to school on the train again and went home.

Thank you Camilo, Antonia and Shrya for this great recount!

home / News / Year 5 / Year 5 and 6 trip to the Globe Theatre
Inspiring Children
To Achieve Their
Personal Best
We use cookies on our website to give you the most relevant experience by remembering your preferences and repeat visits. By clicking “ACCEPT ALL”, you consent to the use of ALL the cookies. However, you may visit "Cookie Settings" to provide a controlled consent.
Cookie SettingsREJECT ALLACCEPT ALL
Manage consent

Due to Covid restrictions we have created an Interactive Tour for you to explore.